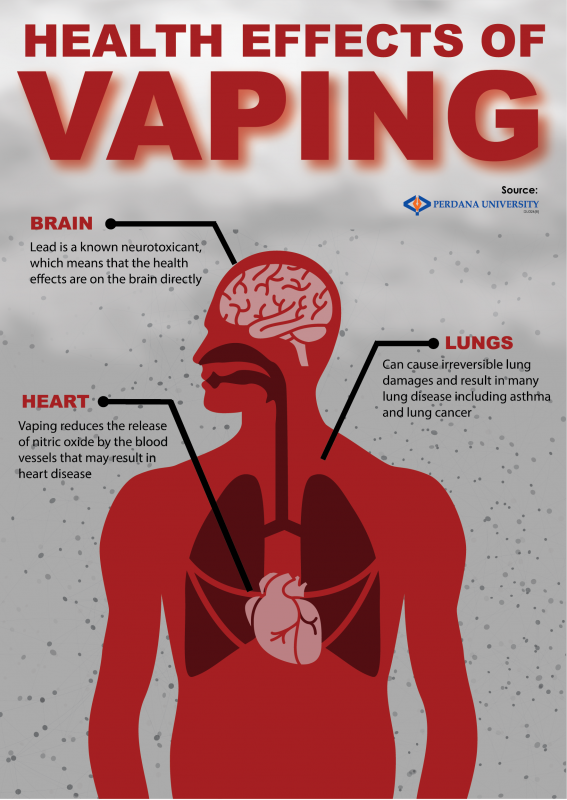 The article below appeared in the May 12th  issue of Health with Perdana, a regular column in The Star by Perdana University faculty members. This week’s article is contributed by

Dr. Barani Karikalan, Senior Lecturer in Pathology at the Perdana University Royal-College of Surgeons in Ireland

Vaping may be seen as less harmful than smoking, but the truth is that it is still bad for your health.

What is Vaping and what are E-cigarettes?

Vaping is the act of inhaling and exhaling an aerosol produced by a vaping device such as an electronic cigarette (e-cigarette). Pocket vapes, pen vaporizers and box mod vaporizers are other vaping devices available in the market. Vaping doesn’t require burning like cigarette smoking. The device, usually battery operated, heats a liquid into a vapour, which then turns into aerosol and breathed in by the individual through a mouth piece. This vapour contain about a dozen of ingredients and flavouring agents including nicotine.

Vaping device was first patented by Herbert A. Gilbert in 1963. His model of replacing paper and burning smoke with heated moist flavourful vapour was rejected by cigarette companies then, because the smoking community was not aware of health risks of cigarettes as they do now. E-cigarettes hit the shelves successfully, only in 2003 in Beijing, China. Hon Lik, a pharmacist and researcher, who is also a hopeless smoker, created the first commercial e-cigarette after his father died of lung cancer. He revealed, later in an interview, that he dreamt of drowning in a sea. Suddenly, the water vaporized and he was able to breathe easily. This dream sparked his idea that laid foundation to the making of e-cigarettes. He introduced e-cigarettes in United states and Europe in 2006. Since then, e-cigarettes journeyed into many countries with various regulations.

In 2008, World Health Organisation (WHO) claimed that it does not consider e-cigarettes as safe and demanded that marketers must immediately remove any such suggestions from their product. In 2009, president Obama gave FDA (Food and Drug Administration) the power to regulate tobacco usage to. FDA announced in 2011 that it will regulate e-cigarettes just like traditional cigarettes and other tobacco products.

FDA’s final deeming regulations on e-cigarettes was released officially in 2016 that included age limits and marketing limitations for e-cigarettes. The regulations were a finely constructed maze of hoops for vaping business owners.

FDA recognized an increasing trend of e-cigarette usage among teenagers in 2018 and called it an epidemic. Youth tobacco prevention plan was introduced by FDA in the same year to reduce this raising trend of e-cigarette usage by the youth. Among many strategies including restricting availability and raising awareness, FDA is also considering a ban on availability of characterising flavours which is the prime attracting factor for the youth towards e-cigarettes. FDA is now actively evaluating the possibility of implementing a policy on restriction of flavours (candy like flavours) that are appealing to the youth.

The American Lung Association (ALA) says that e cigarettes contain many toxic substances such as aldehydes, acrolein (herbicide) and benzene (found in car exhaust) that can cause irreversible lung damage and result in many lung disease including asthma and lung cancer. Some of the flavouring agents used are also known to cause serious lung disease.

Vaping liquid contains many heart toxic substances. They not only result in heart disease but also accelerate disease progression in people who already have heart disease. Evidence suggests that e cigarettes have substantial effect on blood vessels and hence increase risk of heart attack. Researchers from University of Kansas, United States say that “When you smoke e-cigarettes, you are much more likely to have an MI [myocardial infarction or heart attack], coronary artery disease, stroke, and are more prone to suffer from depression”. Other than substances that are directly toxic to heart cells, vaping reduces the release of nitric oxide by the blood vessels that may result in heart disease.

Nicotine has been shown to be toxic to the developing brain of young people.

Scientists found that many of the devices produced vapour that contained lead concentrations above limits established by the federal government, which causes nerve and brain damage. Lead is a known neurotoxicant, which means that the health effects are on the brain directly, and the developing brains of younger adults have the highest susceptibility. Researchers found that about 40 percent of the vaping liquids contained manganese at levels above recommended safe.People who work with manganese are likely to develop manganism, which is a Parkinson’s like disease that deteriorates the brain.

Nicotine has been shown to have effects on reproductive health. When pregnant women are exposed to it, it can harm the developing foetus and lead to babies born with low birth weights.

Second hand vaping is likely also inhaling these toxic metals and putting their health at risk. Other than damage to their developing brain, children who have been exposed to nicotine have more respiratory problems.

In addition to high levels of nicotine, e-cigarette liquids also contain Propylene glycol and glycerine, which can irritate eyes and airways. When heated and vaporized, these ingredients degrade into formaldehyde and acetaldehyde, which are carcinogenic. Many of the devices produce vapour containing chromium, a cancer causing agent, at concentrations above limits established by the federal government.

E-cigarettes produce vapour rather than a tobacco smoke, which means they deliver less nicotine than cigarettes. However, that doesn’t essentially mean that they’re safer. The most intimidating thing that has been discovered about e-cigarettes is that they keep people addicted to nicotine. They make people to smoke traditional cigarettes longer, instead of encouraging them to quit. Research shows that around 70 to 90% of e-cigarette users are still smoking traditional cigarettes.

E-cigarettes may prove less harmful than traditional cigarettes, but not completely safe. Because of the misconception that vaping is harmless, young adults who would never have been introduced to nicotine in their lifetime, are now getting addicted to nicotine.

Ms. Hemala
Marketing Team
How can we help?