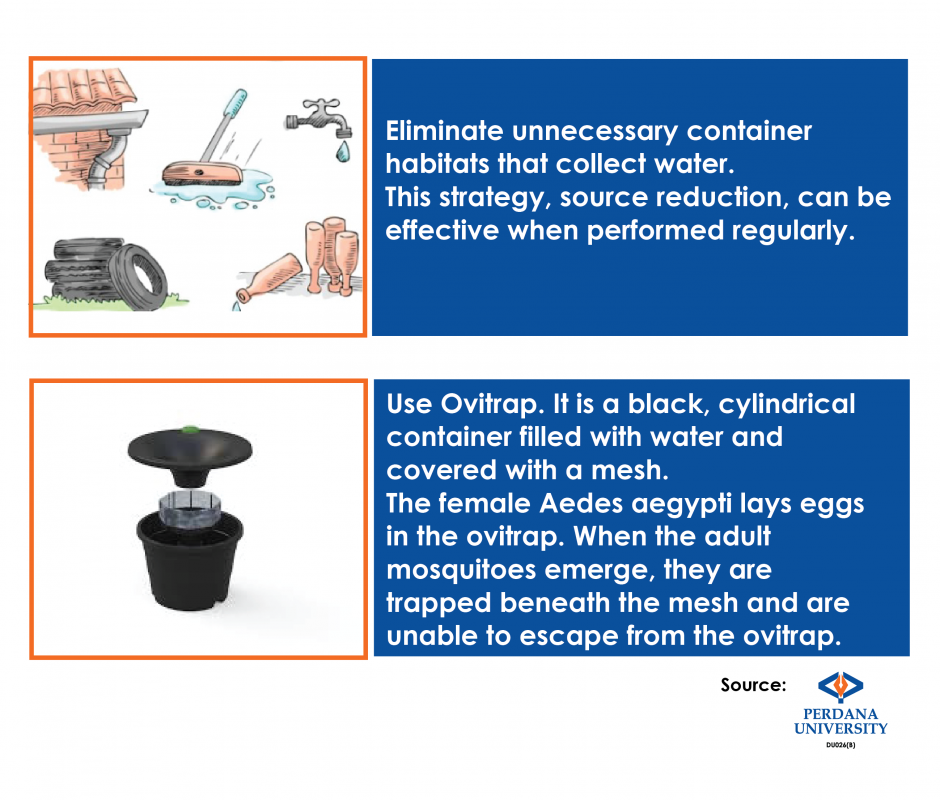 The article below appeared in the June 23rd  issue of Health with Perdana, a regular column in The Star by Perdana University faculty members. This week’s article is contributed by Dr. Jasvindar Kaur a/p R Pritam Singh,  at the Perdana University Graduate School of Medicine

Dengue fever is a re-emerging public health problem with two-fifths of the world population being at risk of infection. Till now, dengue fever was believed to be caused by four different serotypes. The fifth variant DENV-5 has been isolated in October 2013. The likely cause of emergence of the new serotype could be genetic recombination, natural selection and genetic bottlenecks.

Dengue  is  the  most  rapidly  spreading  vector  borne disease  in  the  world.    It is estimated that there are over 50-100 million cases of dengue worldwide each year, with 3 billion people living in dengue endemic countries. Dengue is estimated to cause approximately 20 000 deaths a year globally.   The disease is transmitted by the bite of a mosquito infected with one of the four dengue virus serotypes. Symptoms range from mild to incapacitating high fever, with severe headache, pain behind the eyes, muscle and joint pain, and rash. There is no specific medicine to treat dengue. Severe dengue is a potentially lethal complication.

The trend of dengue incidence in Malaysia has continued to increase since 2001 until 2014.  Malaysia is one of the worst affected countries, with cases recorded increased from 7,103 cases in 2000 to 108,698 in 2014, with 215 deaths and more than 31,000   notified cases in any given year. The control of dengue depends solely on the suppression of the two most important vectors namely, Aedes aegypti and Aedes albopictus. A local study indicated   that the incidence of Dengue was going to increase four times higher in 2020 and six times higher in 2040 as compared to baseline incidence in 2010.

Despite the close monitoring and continuous efforts from the Ministry of Health and Municipals to conduct the prevention and control activities, the number of dengue cases continues to increase due to multiple uncontrolled factors. These factors are   the dengue virus, the human as the host, the environmental condition such as cleanliness, the vectors and its behaviour and the climate change.  The Ministry of Health Malaysia has implemented the integrated strategy for dengue prevention and control program in the National Dengue Strategic Plan (NDSP). There are seven strategies included in the NDSP which is strengthening of the dengue surveillance, practicing integrated vector management, emphasizing on the dengue case management, social and community mobilization towards the prevention activity, ensuring rapid response in managing the dengue outbreak and developing new innovative methods through dengue research.

The primary preventative measure to reduce dengue infections is the control of mosquito populations since the transmission of dengue requires mosquitoes as vectors.

One strategy is to eliminate unnecessary container habitats that collect water (such as plastic jars, bottles, cans, tires, and buckets) in which Aedes aegypti can lay their eggs.  This strategy, source reduction, can be effective when performed regularly, especially when members of a community are mobilized and educated about vector control. For example, mosquito populations can be reduced when all members of a community clear blocked gutters and street drains and keep their gardens free of containers with standing water. Any open containers should be emptied and cleaned each week to eliminate mosquito eggs and larvae. These efforts can reduce the number of mosquitoes living in an area.

Another method of reducing Aedes aegypti is to use an ovitrap. It is a black, cylindrical container filled with water and covered with a mesh. The female Aedes aegypti lays eggs in the ovitrap.   When the adult mosquitoes emerge, they are trapped beneath the mesh and are unable to escape from the ovitrap. Some ovitraps have been adapted to include sticky surfaces that entrap adult mosquitoes, and others include the use of a pesticide on the device. Ovitraps can be also used for mosquito surveillance. When sufficient numbers of ovitraps are used and frequently maintained, the vector population can be diminished. One successful example is in Singapore, where ovitraps were used to eliminate mosquitoes at the international airport. Traps have limitations, they require constant supervision and monitoring to prevent them from becoming productive breeding habitats.

Insecticides can be used to kill mosquito larvae and adult mosquitoes. The use of insecticides is recommended in emergency situations during dengue epidemics or when an epidemic is emerging. On a regular basis, however, sustainable, coordinated, community-based environmental approaches are favoured over chemical methods for controlling mosquitoes, and limited reliance on these chemicals is preferred. Mosquitoes can develop resistance to insecticides. In addition, insecticides are expensive, and high doses can be toxic to humans and other species. Therefore, it is best to be cautious about applying these chemicals.

Recently, researchers used mosquitoes to transfer insecticides to larval habitats. They noticed that after taking a blood meal, female Aedes aegypti enjoy resting in damp and dark areas. To take advantage of this behaviour, the researchers set up dark, damp stations dusted with a bioinsecticide that target larvae. When the mosquitoes came to rest on the stations, their legs picked up the bioinsecticide and transferred it to the aquatic mosquito habitats where they laid their eggs. This method was effective in killing the mosquito larvae and reducing the number of adult mosquitoes.

Biological approaches are also being considered as alternatives to control mosquito populations. Predatory crustaceans called copepods and many varieties of fish, including mosquitofish (Gambusia affinis)   and goldfish, eat mosquito larvae . When these organisms are placed in container habitats, decorative ponds, and pools, they prey on mosquito larvae, effectively preventing mosquito development. The addition of copepods into large water-storage tanks was successful in limiting dengue transmission in Vietnam. Other live predators — such as dragonflies, small aquatic turtles, and beetle larvae — have also been shown to be effective in killing Aedes aegypti.

Researchers at the University of Queensland, Australia, came up with another innovative approach to control dengue transmission. These scientists infected mosquitoes with bacteria called Wolbachia pipientis, which could shorten the lives of dengue-infected mosquitoes. When a mosquito is infected with dengue, eight to twelve days must pass before the mosquito can infect another healthy person, and after that period, the mosquito can continue to infect people for the rest of its life, generally three to four weeks. If its life span is shorter, an infected mosquito would have fewer opportunities to transmit dengue. Currently, the researchers are testing another Wolbachia strain that seems to kill the dengue virus inside Aedes aegypti, which could serve as a dengue vaccine for mosquitoes.

A report assessing the effects of interventions for Aedes aegypti control   published in Biomed Central Public Health 2017 suggests that community participation programmes are an effective intervention to reduce Aedes aegypti .  Another systematic review of published evaluations of community based dengue control programmes suggest that co-ordinated intersectoral cooperation of local health services, trained vector control personnel, civil authorities and the community could encourage communities to take over prevention and control measures.

The globally endemic dengue poses as a serious public health and economic challenge. Efficient, cost-effective, and environmentally sustainable   prevention and control techniques are proposed and practiced in dengue-endemic regions.

Mr. Ezanil
Marketing Team
How can we help?