How our environment acts on our genes 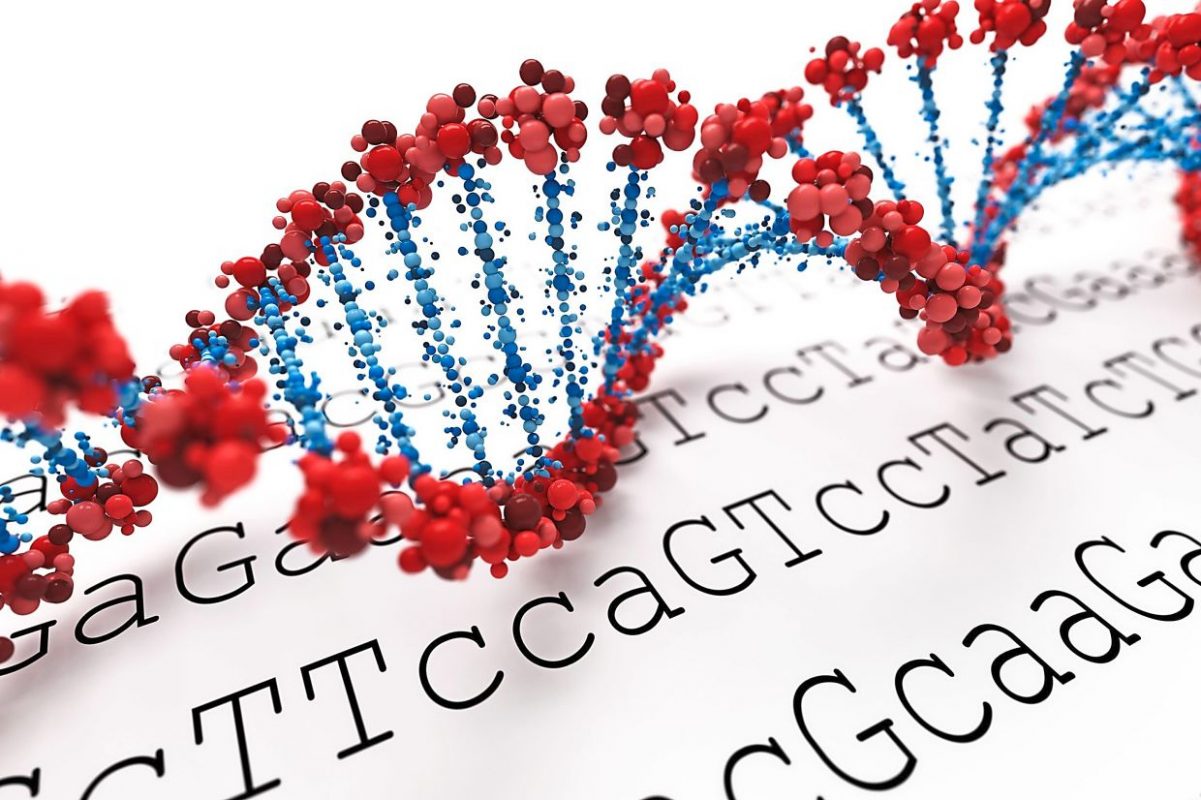 The article below appeared in the July 5  issue of Health with Perdana, a regular column in The Star by Perdana University faculty members. This week’s article is contributed by Dr. Lee Tze Yan, Lecturer, Perdana University School of Liberal Arts, Science and Technology, and Dr Lim Wai Feng, Post-Doctoral Fellow in Molecular Medicine, Universiti Teknologi Mara.

Genetics is a word commonly used when someone is referring to genes, biological inheritance, or even the genetic codes known as deoxyribonucleic acid (DNA).

Some of us might not even be aware that we are actually dealing with genetics when we “conveniently” blame the presence of genes in our body or the genes we got from our parents when we are faced with issues such as obesity, intelligence quotient (IQ), or even our physical appearance.

Sounds familiar? Genetics actually involves all the components mentioned above and is the study of genes and heredity (or biological inheritance).

DNA is a major component of genetics, and also a blueprint of life, which consists of four base sequences – namely, A (adenine), T (thymine), C (cytosine) and G (guanine) – found in every single cell in the human body.

Three base sequences form a codon, which is a unit of genetic code that can be translated into components of proteins.

For example, the combination of adenine-guanine-thymine (AGT) forms one of the 20 types of amino acids (serine) that serve as the building blocks of protein.

DNA contains genes (specific parts of a DNA sequence) that shape your traits, such as eye colour, hair colour, tongue-rolling ability and so on.

These genes are either activated (on) or deactivated (off) by a process known as gene regulation.

Although every cell contains the same sets of genes, it does not express all of its genes all the time.

‘On top of’ genetics

However, genetics alone does not make us who we are. 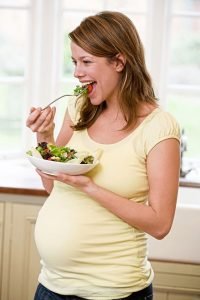 The food a pregnant woman consumes helps to shape the epigenome of her child. — AFP

The environment we live in also influences the expression of our genes.

This is known as epigenetics, where the prefix “epi” means “on top of”.

Epigenetics is the study of chemical compounds that are added to genes to regulate them and the factors that influence them.

Epigenetic changes occur throughout the entire course of our lives.

During our lifetime, we are exposed to a wide range of “environments” that trigger biological changes via epigenetic marks, without changing our DNA sequence.

Epigenetic marks either make the gene easier or harder to read, and subsequently decide whether to switch “on” or “off” a certain gene.

These epigenetic marks can be passed down from parents to children.

All our epigenetic marks, known collectively as our epigenome, determine the types of human cells created in our body, such as red blood cells, bone cells, fat cells, muscle cells and nerve cells, all of which have their own specific function.

The factors that trigger epigenetic marks include:

These experiences happen right before and after birth, and have the ability to trigger biological changes that can alter the expression of our genes, which can potentially last a lifetime.

This explains why identical twins can have different behaviours, skills, health and achievements, despite having the exact same set of genes – it is due to their different epigenomes caused by their different (even slightly) experiences or environments.

This epigenome can be short-term or long-term, as other experiences a person has can alter it.

Therefore, it is crucial to provide positive experiences from within the womb and as a baby, as the brain is developing actively during that period of time and can shape the signature epigenome that can switch “on” a child’s genetic potential to the fullest.

The food and supplements that we consume are processed into smaller molecules that can be used by our body. 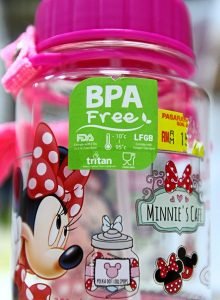 BPA has been found to negatively influence certain epigenetic markers and increase risk of disease, resulting in many products declaring themselves BPA-free. — Filepic

For instance, the methyl group (comprising one carbon and three hydrogen atoms), which can be derived from either folic acid or vitamin B, can be added to our DNA via a process known as DNA methylation.

Children of overweight/obese parents are more likely to gain weight as their risk of obesity is increased.

Apart from the genetic aspects, epigenetics can further explain this susceptibility to gaining weight.

These marks can be influenced by certain nutrients, chemicals like food preservatives, and even drinking breast milk as a baby.

Chemicals like bisphenol A (BPA), which is a component in polycarbonate plastic used for products like water bottles, has been found to reduce methylation in the Agouti gene (a black pigment gene) in mice, leading not only to yellow fur, but also adult-onset obesity, diabetes and tumours, in the affected mice.

Air pollution can also decrease DNA methylation, which in turn increases the risk of inflammation, certain chronic diseases and restricted growth in foetuses.

Studies have found that these harmful epigenetic events can be reversed with a methyl-rich diet.

In particular, a mother’s diet during pregnancy is important in shaping the epigenome of her child, especially in overcoming harmful epigenetic events the child might be exposed to in the womb..

In short, we are not only what we eat, but also what our parents eat.

Why do some people get addicted to certain recreational drugs?

For example, tobacco smoke tags the DNA sequence with epigenetic marks that increase the proteins common in addiction.

As epigenetic markers can be passed from parent to child, this subsequently increases the risk of the next generation using these recreational drugs as well.

These changes last into adulthood and increases their risk of becoming addicted to alcohol.

Remember, the DNA from each parent does not tell the whole story.

Environmental factors formulate one’s epigenome, which determines one’s health outcomes, in addition to the genome itself.

It is up to you to decide on what kind of epigenome you want for yourself and for your kids.

Most importantly, remember that your environment can shape you, you are what you eat and your lifestyle determines who you are.

In essence, stop blaming your “defenceless” genes and start practising a healthy lifestyle from now on! 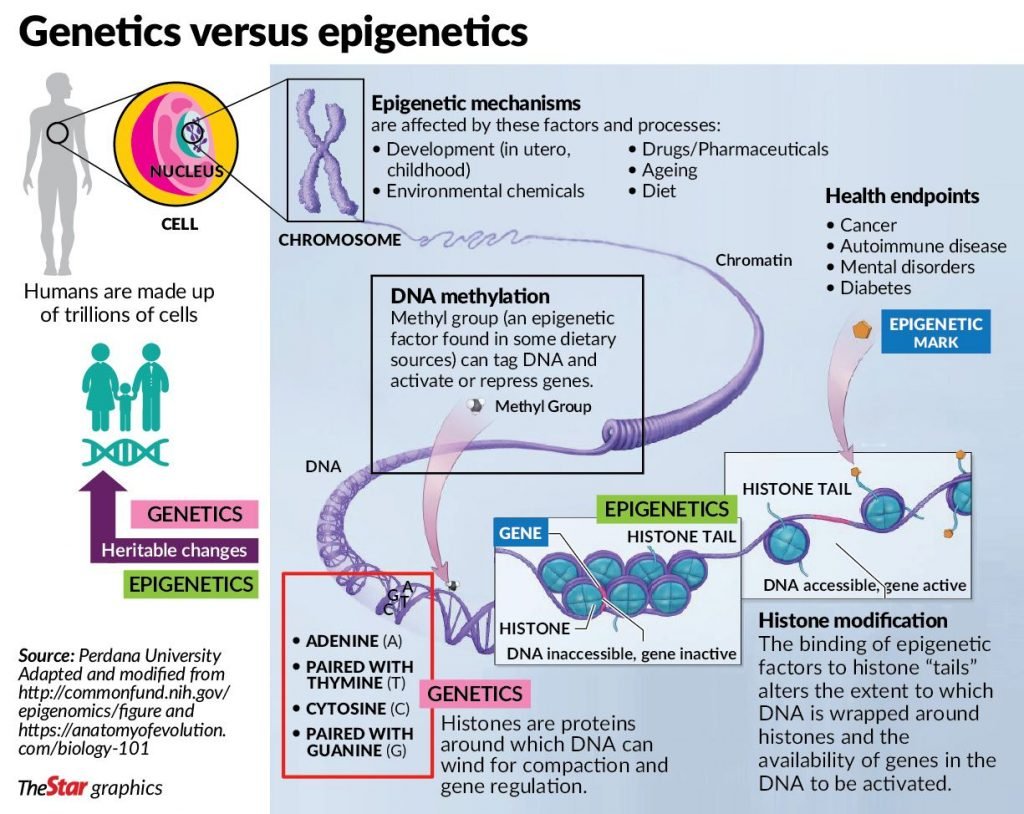