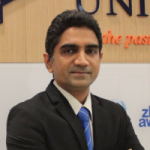 Assoc. Prof. Dr. Mohammad Asif Khan’s undergraduate degree was in Biotechnology from the National University of Singapore (NUS). He then went on to further his studies (MSc and PhD) at NUS and chose to specialize in bioinformatics, given its pivotal role in the growth of biotechnology and pharmaceutical industries. After completing his PhD in 2010, he accepted a full-time, faculty position at Johns Hopkins University (JHU), USA. Not long after (2011), he was selected by Johns Hopkins as one of the pioneer team members to settle in Malaysia to help build a bioinformatics research capacity, as part of the collaboration with the then newly established Perdana University. He was concurrently offered an Adjunct Assistant Professor Position with the Department of Pharmacology and Molecular Sciences, Johns Hopkins University School of Medicine until 2014, and then as a Visiting Scientist until 2017. He is currently appointed as the Founding Dean of the Perdana University School of Data Sciences (PUScDS; https://www.perdanauniversity.edu.my/puscds), Malaysia and Chief Data Officer for the university. He founded and established the Perdana University Centre for Bioinformatics (PU-CBi) in May 2014 and later the PU-SDS in May 2015, which subsumed the existing PU-CBi and saw the formation of a new Centre for Computing (PU-CC). In 2018, together with his faculty members, he founded a startup data-science company for PUScDS, named Alterquo Pte. Ltd. (https://alterquo.io), where he is serving as the CEO.

Dr. Khan’s research interests are in the area of biological data warehousing and applications of informatics to the study of immune responses, vaccines, viruses, venom toxins, drug design, and disease biomarkers. He has authored/co-authored close to 50 international, peer-reviewed research and review articles, published in various international journals, books and conferences, and presented his work at numerous international conferences. He has been involved in the development of several novel bioinformatics methodologies, tools, and specialized databases, and currently has three patents granted. Most recently, he was the Section Editor of the Applications Volume of a three volume Encyclopedia on Bioinformatics and Computational Biology (The A to Z of Bioinformatics), published by Elsevier (http://bit.ly/bioinfopedia). His teaching experiences (2006-19) have been in bioinformatics, imparting to undergraduate/postgraduate students at NUS (~1500 students over the years) and to medical and bioinformatics students at PU (~200 students); and mentored research projects of more than 50 students (45 BSc, 3 MSc and 5 PhD) prior to formally supervising his own students. He is currently supervising two MSc (Bioinformatics) and six PhD (Bioinformatics) students, and has successfully graduated seven. His publications include peer-reviewed, journal articles and book chapters on bioinformatics education. He has led the curriculum development of several bioinformatics/data science undergraduate (BSc) and postgraduate (PgD, MSc and PhD) programmes (http://bit.ly/pusdsprogrammes).

Dr. Khan is a long-standing ExCo member and now the elected President of the Asia-Pacific Bioinformatics Network (APBioNET; https://www.apbionet.org/organisation), and serves as the Honorary Director of the APBioNET Limited (LTD). He is also elected as the Vice President of the Association for Medical and Bio-Informatics, Singapore (AMBIS; http://www.ambis.org.sg/executive-committee.html), and the immediate past President. His services to the scientific community include as a reviewer for numerous journals, conferences, and funding agencies, and has donned various important roles in the organization of several local and international bioinformatics conferences, meetings and workshops.