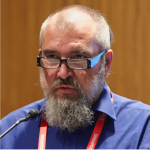 A fascination with computers and networking as a student lead to Andrew pioneering implementations of networks starting with installing the first Ethernet in Australia at Digital Equipment Corp in the early 80’s, the first fibre optic extended Ethernet in the mid 80’s, national converged DECnet, TCP/IP, SNA and X.25 networks in the late 80’s, ISDN, Frame relay and secure networks in the early 90’s, development and operation of one of the first Internet Service Providers in Australia in the 90’s, managing the development and delivery of the next generation Australian National Research and Education Network GrangeNet and AARNet3 networks, managing the development and operation of the Australian Government ICON fibre network and setting world speed records in International networking in the early part of this century.

Since joining the Australian National University in 2006 he has managed the evaluation, development and implementation of high speed communications systems, fibre networks and collaboration facilities. He represents the University at International Research Cloud and Network groups including APAN, Internet2 and TNC and has held the positions as Co-Chair of a number of APAN Working Groups. As Co-Chair of the APAN E-Culture working group for many years he lead the production of the Dancing Q and Dancing Across Oceans Performance events.

Andrew led the development of InfiniCloud an extension of HPC InfiniBand capabilities into Openstack Clouds and the creation of the first trans-Pacific extended InfiniBand network connecting Australia and Singapore through the USA to deliver the next generation of high speed data transfer and distributed computation. Andrew worked closely with AARNet to implement the first 100G network connection on the experimental AARNet-X 100G network linking NCI to the global research community.

His current role at the National Computational Infrastructure (NCI) involves working on High Performance Networks, Computing and Cloud systems. He manages the NCI Cloud Team supporting both the NCI private and the National Nectar Research Clouds and National Data collections.

Australia is served by a diverse framework of compute and data services which support research across a wide range of science disciplines. This presentation covers Australian HPC, HPD, Cloud, Identify federation and Data storage capabilities.