The common parasites (including various worms) that infect us 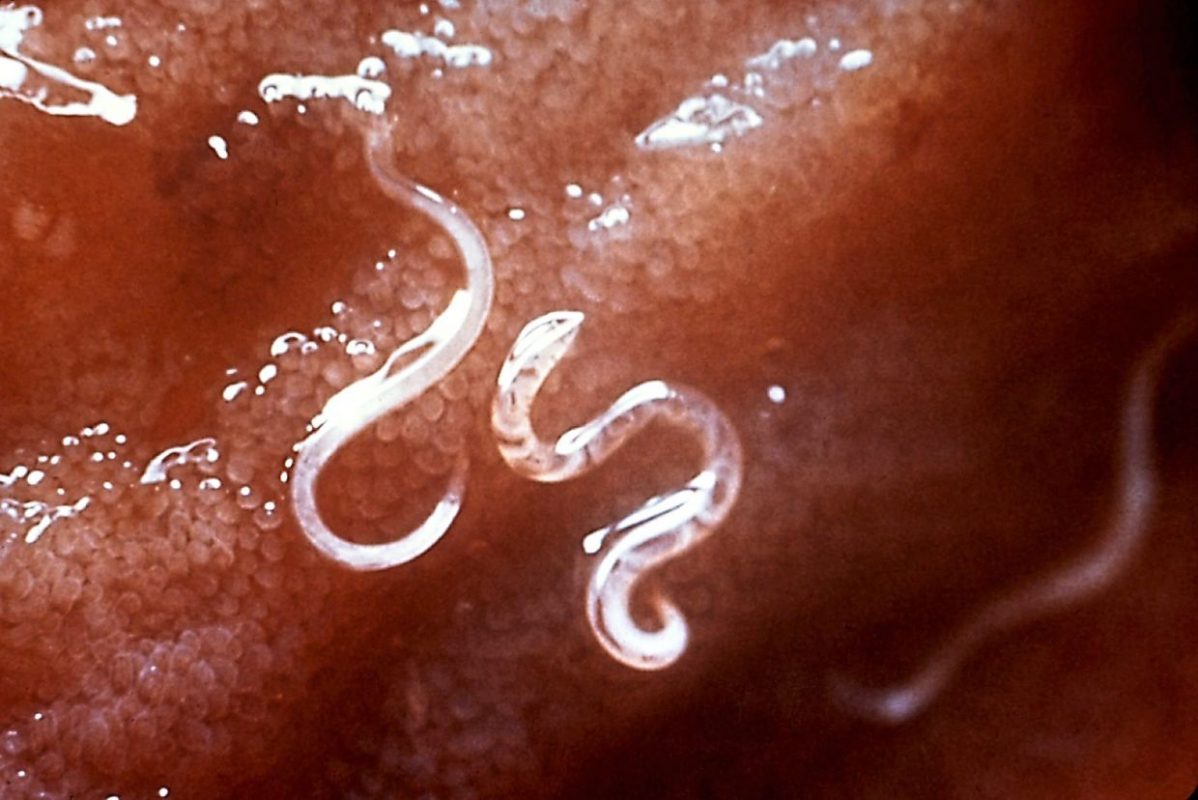 The article below appeared in the October 11  issue of Health with Perdana, a regular column in The Star by Perdana University faculty members. This week’s article is contributed by Assoc. Prof. Dr. Mohammad Nazmul Hasan Maziz, Associate Professor in Medical Microbiology, Perdana University Graduate School of Medicine. 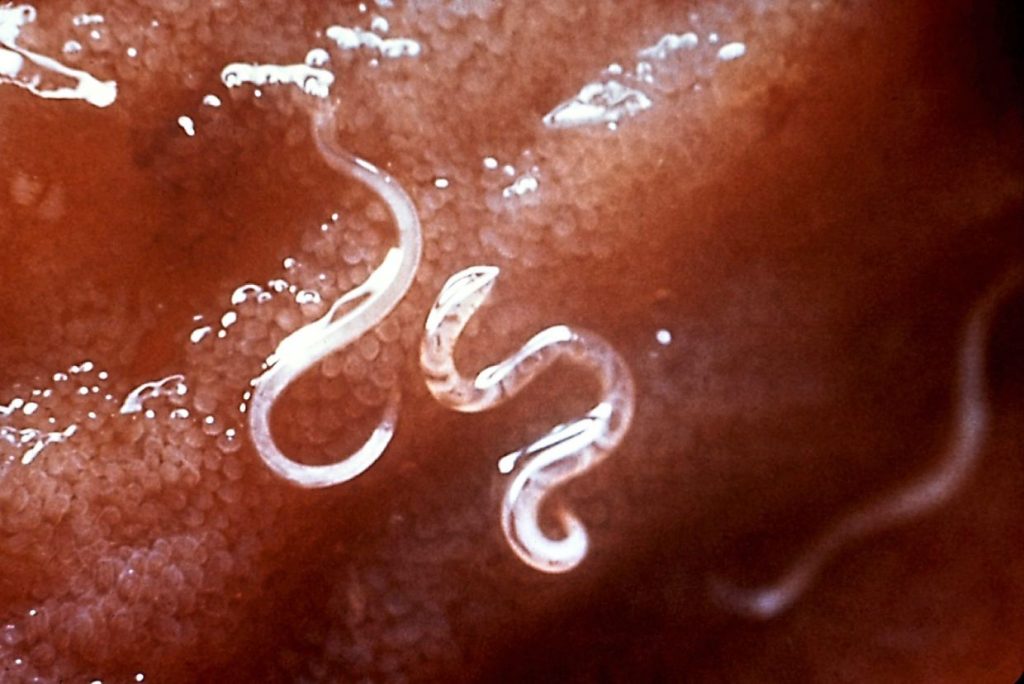 Hookworms attach to the small intestine as adults and feed voraciously on our blood, causing anaemia, among other problems. — US CDC

All of us are probably aware of the word “parasite”, but how many of us actually know what a parasite is?

Or how they enter our body, what diseases they cause and how to treat such an infection?

Basically, a parasite is an organism that is dependent on a host for its survival.

A host is an organism that harbours the parasite, providing it with nourishment and shelter, and is usually larger in size than the parasite.

Parasites can be of different types, e.g. the single-celled protozoa, flukes, tapeworms, roundworms and so on.

Some parasites can stay in just one host throughout its lifetime, while others require two hosts (one intermediate and one final) in order to complete its growth and development.

There are many ways human beings can get parasitic infections.

Some of the common ways are from mother to child in the womb or during delivery (congenital infection); direct or indirect contact, including during sex; inhalation; bite of a vector; the faecal-oral route; blood transfusion or contamination; and through injury of the skin and mucous membranes.

But the most common mode of infection is via the faecal-oral route.

This occurs through the consumption of raw or undercooked food like fish, meat and vegetables, or water, which is contaminated with faeces containing the infective stages of a parasite.

Here are some of the common and medically important parasites that are prevalent in our region. 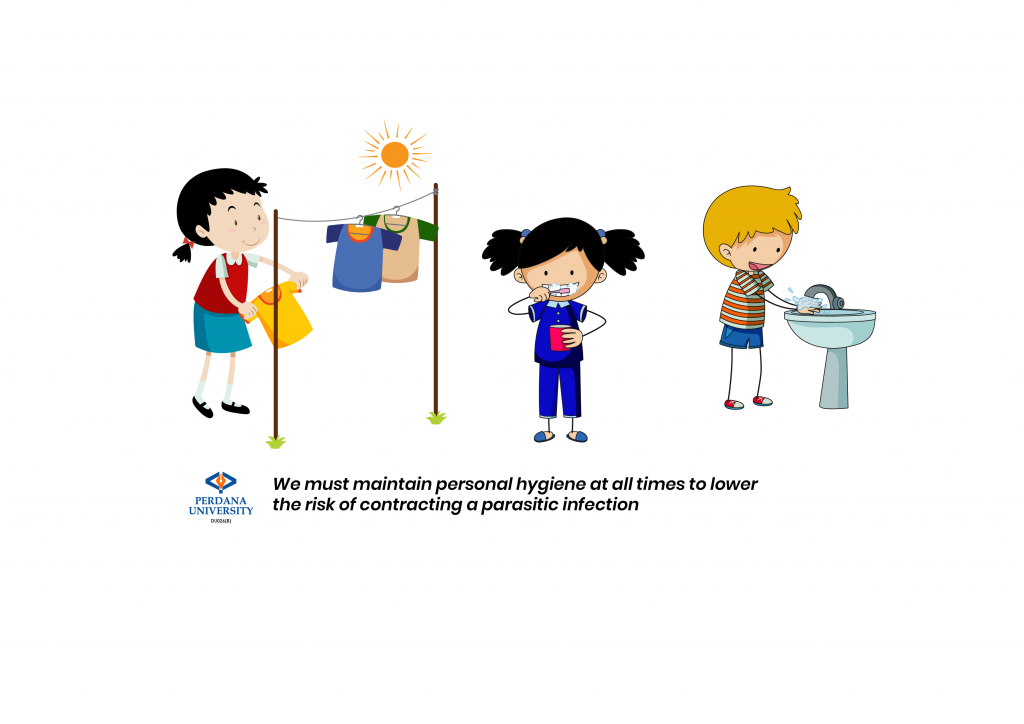 Plasmodium is a genus of single-cell DNA-based organisms that are obligate parasites of vertebrates and insects.

An obligate parasite is one that cannot survive without a host.

Plasmodium parasites cause malaria, which affects over 40% of the world’s population and remains the world’s most devastating human parasitic infection.

It is the most important cause of fever and illness in the tropical world.

It is also probably one of the oldest diseases known to mankind.

There are four species of this parasite: Plasmodium vivax, P. ovale, P. malariae and P. falciparum.

The most dangerous of the four is P. falciparum, which accounts for 90% of malarial deaths.

Plasmodium is transmitted to humans via the bites of infected female Anopheles mosquitoes.

The attack begins with fever, chills and rigors, with the patient’s temperature rising to as high as 40ºC and falling again over a period of several hours.

Other symptoms include a poor general condition, headache, diarrhoea, nausea and vomiting.

Chloroquine is usually used for treatment.

One of the most important and pathogenic parasites in humans, E. histolytica is primarily a human parasite.

It is transmitted by faecal contamination of drinking water and food by direct contact with dirty hands or objects, as well as through sexual contact.

It is the cause of amoebic dysentery (bloody diarrhoea) and colonic ulcerations.

The symptoms are often quite mild and may include diarrhoea, stomach pain and stomach cramps.

In rare cases, E. histolytica invades the liver and forms an abscess.

Metronidazole or tinidazole is usually used for treatment.

This is a flagellated parasitic microorganism that colonises and reproduces in the small intestine, causing the diarrhoeal illness known as giardiasis.

Its infection occurs through the consumption of cysts in contaminated water or food, or via the faecal-oral route (through poor hygiene practices).

Giardiasis affects people of all ages.

Metronidazole is usually used for treatment.

This parasite is also known as pinworm, seatworm or threadworm.

Its natural habitat is the caecum, appendix and the adjacent ascending colon in humans.

It causes enterobiasis, which commonly occurs in children.

Pinworm infection usually occurs through the ingestion of infectious eggs on contaminated hands, food, water, clothing and dust, which are transferred directly via the faecal-oral route by one’s fingers.

This is facilitated by a perianal itch (pruritis ani) caused by the presence of pinworm eggs in the perianal folds.

Transfer of the eggs commonly occurs when scratching the itch is followed by nail-biting, poor hygiene or inadequate hand-washing. 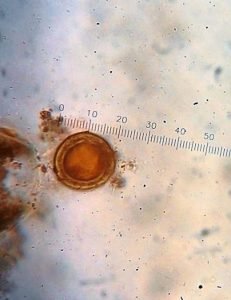 Also known as roundworm, this parasite can grow to a length of 35cm inside a human host.

It is the most common and largest parasitic worm in humans.

Severe infections can cause intestinal blockage and impair growth in children.

There are two main types of hookworms: Ancylostoma duodenale and Necator americanus.

Hookworm infection is a leading cause of maternal and child death in the developing countries of the tropics and subtropics.

It usually infects humans as larvae, which develop from eggs that are excreted in human faeces onto soil.

These larvae will then penetrate the skin of a person walking barefooted on the contaminated soil.

A. duodenale can also cause infection through the ingestions of its larvae.

The danger of hookworms is that they feed voraciously on human blood as adults living in the small intestine.

Symptoms involving the skin include intense itching, oedema, redness of the skin (erythema) and rash.

Severe infection in children can affect their physical and mental growth and development.

This parasite is commonly known as a whipworm because it resembles a whip.

Humans become infected with the parasite via ingestion of infective eggs from contact with hands or food contaminated with soil that contain the eggs.

This is one of the most common human parasites in developed countries and causes the disease toxoplasmosis.

It is transmitted through eating raw or undercooked beef, lamb or pork contaminated with the parasite’s tissue cysts; consuming soil, milk, water or vegetables contaminated with its oocytes; and inhalation of its oocysts.

Congenital toxoplasmosis can occur if the mother is infected during pregnancy.

Some people may occasionally experience a few weeks or months of mild, flu-like illness, including muscle aches and tender lymph nodes.

In a small number of people, eye problems such as blurred vision, floaters, pain, red eye, metamorphopsia (when straight lines look rounded or curvy) and photophobia (extreme sensitivity to light) may develop.

There are many more parasites, aside from those mentioned in this article, that can cause infection in humans.

Generally, parasitic infections are diagnosed in the laboratory through blood tests, stool examination to detect parasitic eggs, and microscopy.

Parasitic infections can sometimes be very serious, but early detection and treatment can provide good outcomes.

There are several steps we can take to lower the risk of contracting a parasitic infection, including:

In other words, we must maintain personal hygiene at all times.