Anaemia is not just caused by iron deficiency 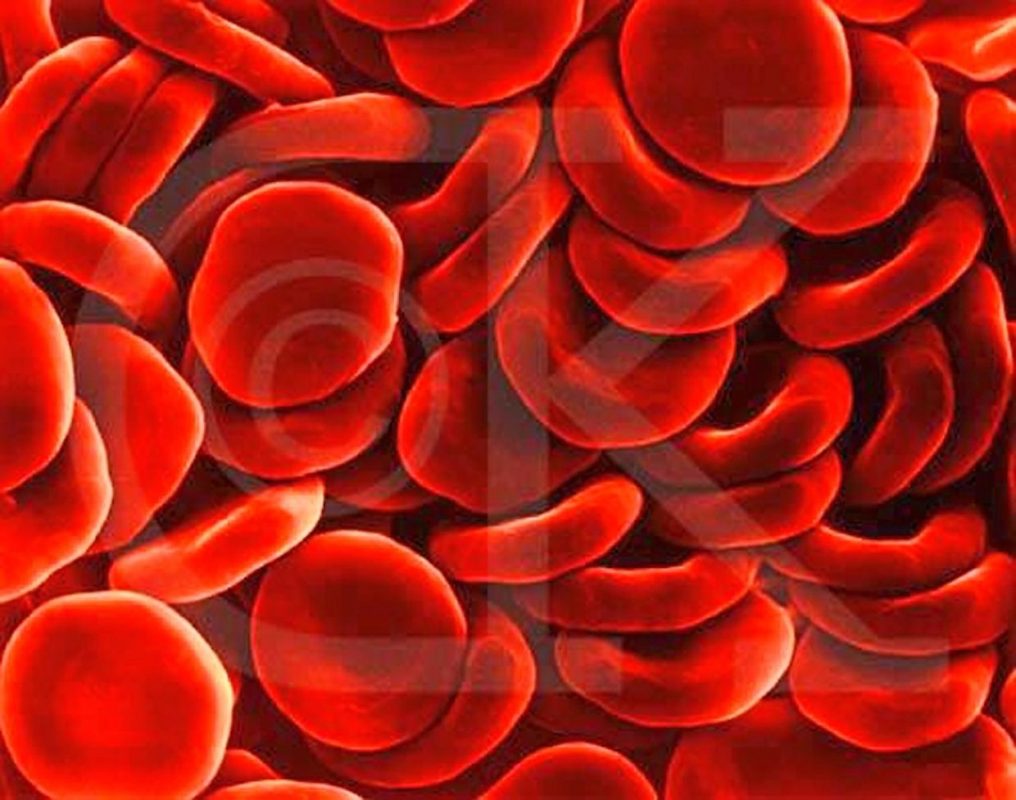 The article below appeared in the August 30  issue of Health with Perdana, a regular column in The Star by Perdana University faculty members. This week’s article is contributed by Dr. Lee Tze Yan, Lecturer, Perdana University School of Liberal Arts, Science and Technology, and Dr Lim Wai Feng, Post-Doctoral Fellow in Molecular Medicine, Universiti Teknologi Mara.

Do you have fainting spells, especially under a hot sun? Or frequently look pale, especially your lips?

Other types of anaemia do not benefit at all from iron supplements, and taking them might indeed worsen the patient’s well-being as iron cannot be secreted out from the human body.

The additional iron from the unnecessary supplements will instead be deposited in our organs, which might eventually lead to organ failure.

So be cautious of simply taking iron supplements.

What then is anaemia?

Understanding the structure of our red blood cells and its function will help shed some light on this condition.

In our bloodstream, we have plenty of red blood cells that are round and biconcave in shape, which enables them to facilitate the transportation of oxygen and move smoothly through our blood vessels, especially the capillaries (the smallest of our blood vessels).

A single red blood cell consists of millions of haemoglobin molecules, which function as an important oxygen carrier in our body.

Haemoglobin is what makes our blood look red.

It is made up of two alpha- and two beta-globin proteins, each with a haem group (an iron complex of protoporphyrin).

These two types of globins fold together into tetramer chains to form a functional haemoglobin molecule.

Haemoglobinopathies are a group of inherited blood disorders that affect the ability of red blood cells to transport oxygen from the lungs to all parts of the body.

As the shape of our red blood cells is crucial to its function, any abnormalities in its shape, e.g. sickle-shaped cells in sickle cell anaemia, will cause problems.

In addition, any faulty production of the globin chains can give rise to thalassaemia.

Iron is an essential mineral for our body as it plays an important role in regulating our bodily functions, especially as an oxygen carrier in red blood cells.

A shortage of iron in our body will lead to iron deficiency anaemia.

In general, anaemia is characterised by the reduction of haemoglobin levels, leading to symptoms such as fatigue, dizziness, pallor, and disturbances of cognitive development and productivity at the workplace. 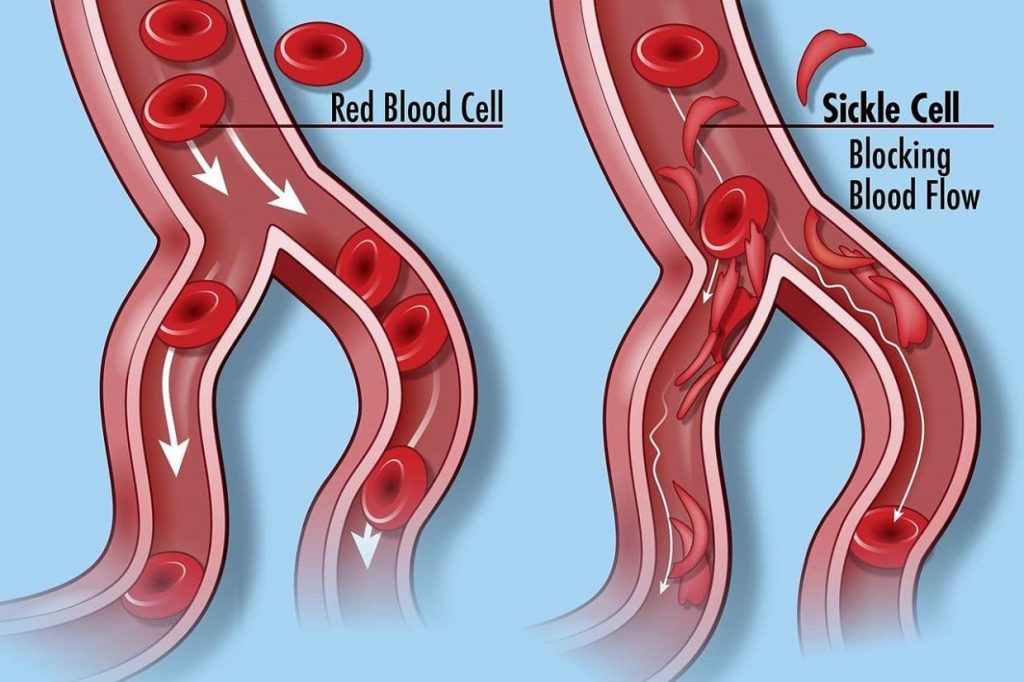 While normal red blood cells (left) flow smoothly and easily through our blood vessels, sickle cells tend to get stuck and clog them up. — Wikimedia Commons

Sickle cell anaemia is an inherited red blood cell disorder in which there aren’t enough healthy red blood cells to carry oxygen within the body.

This happens when there is a gene defect or mutation known as a single nucleotide polymorphism (SNP) in the beta-globin gene.

Nucleotides are the building blocks of DNA (deoxyribonucleic acid) and consist of one of four bases (adenine, guanine, thymine and cytosine), a molecule of sugar and a molecule of phosphoric acid.

The mutation causes the base adenine (A) in the codon GAG to be replaced with thymine (T), changing the codon to GTG.

A codon, which consists of three nucleotides, codes for the production of specific amino acids.

As such, the change in the codon results in the production of the amino acid valine (codon GTG), rather than glutamic acid (codon GAG).

This causes the red blood cells to be shaped like sickles or crescent moons.

These sickle cells tend to die early, causing a constant shortage of red blood cells within the body.

Unlike regular red blood cells, which are flexible and move smoothly through the blood vessels, these sickle cells are inflexible and “sticky”.

This causes a tendency for them to get stuck and clog blood vessels, especially the small capillaries.

Thalassaemia is a group of inherited autosomal recessive blood disorders, i.e. you must receive a copy of the relevant recessive gene from each of your parents in order to develop the disorder.

It is characterised by a reduced amount or absence of one or more globin chains.

If one or more of the genes do not work or is defective, the individual will have thalassaemia.

On the other hand, any defect in the beta-globin chain, which is coded by beta-globin genes on chromosome 11, will lead to beta thalassaemia.

HbE happens when the first guanine in the codon for glutamic acid (GAG) is substituted with adenine to become the codon for lysine (AAG) within the beta-globin gene.

This change causes decreased production of the beta-globin chains and unstable haemoglobin molecules.

Genetic counselling is an important area to explore in order to prevent future cases of inherited blood disorders, especially for individuals who carry the defective gene (carriers) – sometimes without even knowing it.

Screening programmes are useful to identify and counsel thalassaemia carriers about the chances, consequences and effects of passing the defective genes to their children.

Free screening for thalassaemia is currently available in government clinics and hospitals, and plays an important role in preventing and controlling the number of thalassaemia cases in our country. 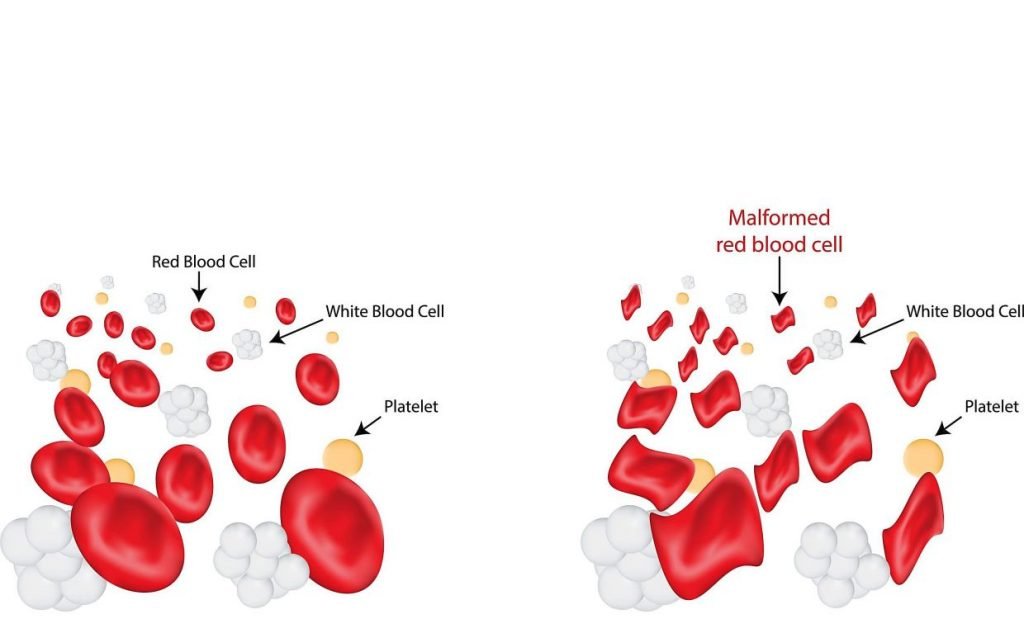 From our daily meals, approximately 1-2mg of iron is absorbed by our duodenum and carried by transferrin (iron transport protein) to the bone marrow to help produce haemoglobin.

Excess iron is carried by ferritin (iron storage protein) to the liver where it is stored.

This stored iron is readily released when the body needs it.

Iron depletion is a condition where there is a reduction in the amount of iron stored, but the body’s functions can still be maintained with adequate iron supply (e.g. through diet).

A blood test will show a slightly lower ferritin level, but a normal haemoglobin level.

However, iron deficiency erythropoiesis is a condition where there is a lack of both iron supply and iron reserves (nutritional factors), or the presence of faulty iron transport proteins (genetic factors).

A blood test will show a lower ferritin level than iron depletion, but a normal haemoglobin level.

In anaemia, both the haemoglobin and ferritin levels are low.

Iron deficiency is one of the most common nutritional disorders.

It mainly occurs among young children, pregnant women or those having their periods, vegetarians who do not take enough iron-rich foods or supplements, and frequent blood donors.

According to the World Health Organization (WHO), iron deficiency is the most common cause of anaemia, affecting almost two billion people worldwide.

The clinical symptoms of iron deficiency anaemia and other haemoglobin-related diseases are very similar, thus misdiagnosis is common.

Therefore, it is important to perform a blood test to differentiate between iron deficiency anaemia and other haemoglobin-related diseases before any action is taken.

In essence, there is a plethora of information that can be found in our tiny red blood cells.

These specialised cells with unique properties and amazing functions form an integral part of the blood circulatory system in our body.

We should never underestimate the “power” of our red blood cells as any defects or abnormalities in them will cause chaos in our highly regulated body.

So, the next time when you hear the term “haemoglobin havoc”, you will know what it means!