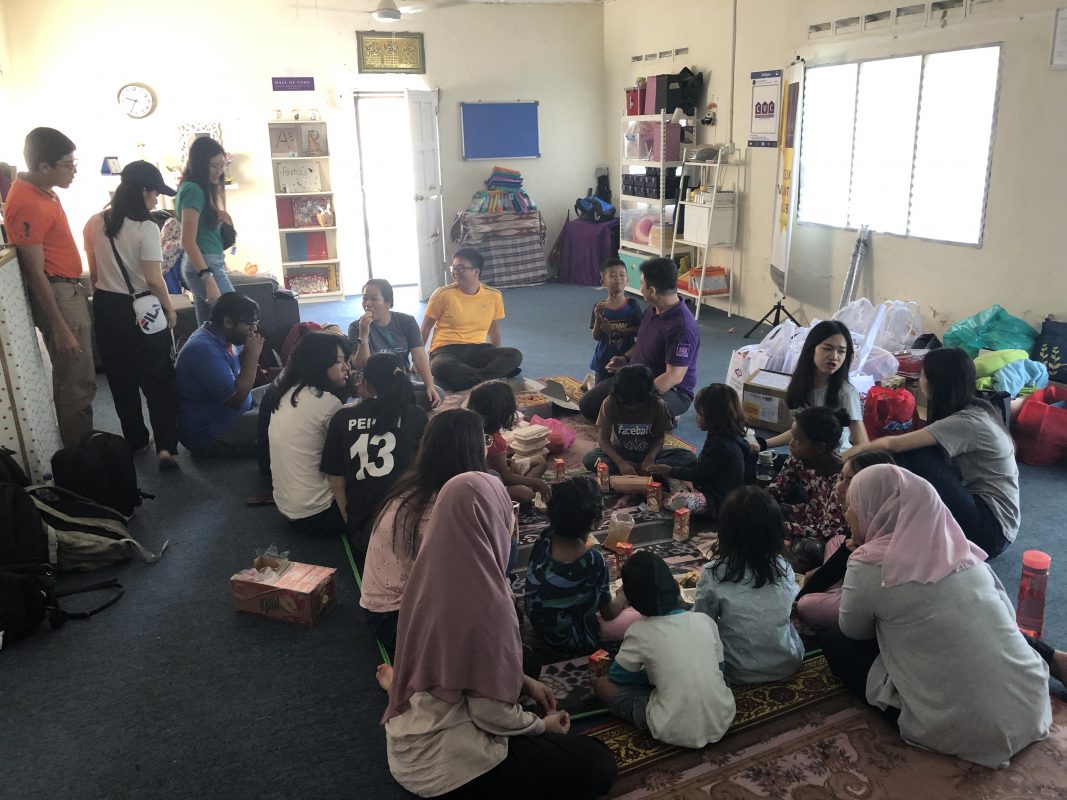 in Articles, News and Events, PUSFS

On 10th March 2019, a group of FIS students joined the Celik Volunteer Club in Kampung Orang Asli Kachau Luar, Semenyih to conduct The Little Einstein Classroom to 22 Orang Asli children below 12 years old. This visit was initiated as part of the Introduction to Critical Thinking course, with the intention of “educating” the FIS students about life. However, I was very wrong and here’s why:

The week before the visit, Diviya updated me that every student in the class had chipped in RM 10 to buy stationery for the Orang Asli children. Diviya’s mother even volunteered to buy the stationery and delivered it all the way to PU. When the FIS office learned about this, Pn. Rozita took the initiative to approach KSRAMC to sponsor refreshments for the visit and Ms. Izzati volunteered to join the visit although she had to sacrifice half of her Sunday. The Friday before the visit, the students stayed back after class to run through the itinerary. Some even stayed longer to pack the goodies.

On the day of the visit, after a long ride into nowhere (at one point, the bus driver even thought we lost our way), we finally arrived at Kampung Orang Asli Kachau Luar. While the children were having their breakfast, we energised ourselves with nasi lemak brought by Rahayu. Slowly, the ice began to break. Aishah and Fatini started to talk to the children and the noise in the house just escalated from there! The first item planned was a sing-along session – Hokey Pokey. Abang Katak (Takshandran) led the song with the help of Rahayu and Diviya, and everyone had a good time of exercise. After dancing to the song, the children wanted to eat again! Maybe they danced too hard. The highlight of the break was watching Xin Yin play “human skipping rope” with the children.

Once their stomachs were refilled, we started our lesson on energy. Ashley presented the theory part while Adam and Hui Yu demonstrated the experiment – Cup Gliders. When Hui Yu (who is normally quiet) took the stage, she caught everyone’s attention, including the agitated children; she was LOUD! Then, the children were divided into smaller groups to make their own cup gliders, facilitated by the FIS students. When the cup gliders were made, the children were very excited to “fly” their cup gliders. In the midst of the excitement, Ashley quietly approached me to inform me of a little girl, Nini (not her real name) who had a weak right arm but I was too preoccupied with moving on to the next item – cup gliders flying competition. I forgot all about Nini. After a few rounds of competition, I noticed Zhi Xin holding the cup gliders for Nini while Nini pulled the rubber bands with her left arm. Working together, they managed to fly the cup gliders high and Nini was never excluded from the activity. We had planned only five rounds of competition but we ended up with more than ten! Ariv and Manesh became part of the children too.

After giving them a lesson on energy, we were drained of our own. When the President of the club, Dr. Muhammad Heikal saw our sorry state, he decided to give us a break and distributed the items donated by the public to the children. While most of us were resting, Shuet Yee, Fatini and Aishah joined the children, helping them to pack the donated items and Samantha and Ter Syuen quietly picked up the rubbish. Finally, it was our turn to distribute the goodies we had brought. After a photography session, it was time to say goodbye. The children were thankful and made sure they gave us “salam” before they left.

I was humbled by the whole experience – the students’ involvement and contribution, PU staff’s kindness and Dr. Muhammad Heikal and Mr. Amerr Azmi’s dedication. Thank you for EDUCATING me.